One of the most popular small US Army 'vehicles' of WW2 is without doubt the M3A4 Hand Cart.
A general misconception is that this was an Airborne item and only used by paratroops. In fact the Cart was a standard Ordnance item used by every branch of the US Army to haul ammunition and equipment.
Two carts could be transported in the back of the 2 1/2 Ton Trucks on the floor of the bed between the rows of seated troops.
Many collectors say these carts were intended to be drawn by the Cushman Model 53 Airborne Scooter, but neither the Hand Cart manual, nor the Cushman manual describe this. Furthermore these hand carts had been in use for many years before the Cushman scooter was put into production and there are no WW2 pictures showing this practice around...

Although the earliest Army carts were fitted with motorcycle wheels, they are completely different from the carts issued to the US Marine Corps, which were equipped with the larger 19" 'motorcycle style' rims. The latter were not used by the US Army during their European campaign.

The US Army had several different types and models of Carts in inventory over the years preceding WW2 but during the war the most common model used in the ETO was the M3A4.
The M3A4 was derived directly from the pre-war carts developed by the US Army Infantry Board in the 1930s. These early carts were equipped with motorcycle wheels and tires and were described in the July-August 1936 edition of the Infantry Journal:

Early WW2 production carts kept the pre-war aluminum slatted box design but pretty soon the carts were made with a full metal cargo body.
Except for some very early M3A4 Steel Bodied Carts which had a plain box without re-inforcing at the top and no holes to attach brackets; the M3A4 Cart served as a basic cart which could be converted into other models by bolting additional parts through the holes in the body provided for this purpose.
The Model M4A1 was thus equipped with brackets for the transportation of the M1917A1 water cooled Machine Gun, while the M5A1 was equipped with brackets and straps to hold the .50Cal M2 HB Machine Gun and its M3 Tripod. The M6A1 was used to transport the 81mm Mortar. 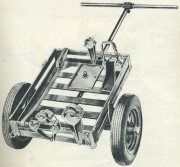 Hand Carts M4A1, M5A1 and M6A1 as illustrated in ORD9-SNL A-42, dated 1 June 1945
Note the 'bolt on' parts and brackets that hold the tripod or mortar parts
All carts are equipped with aluminum wheels, easily identified by the round holes in the rims and the M5A1 shown is the early pattern with aluminum slatted box. 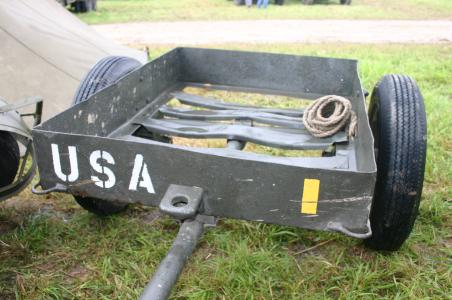 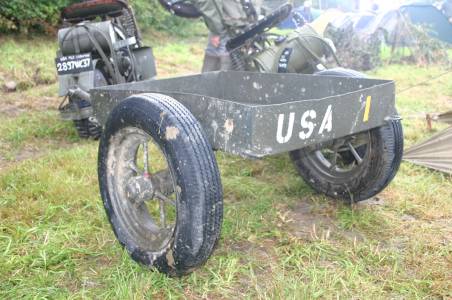 Although in bad shape, the cart above is a rare example of an early M3A4 with plain box and no holes nor re-inforcing rib around the top of the body. The above cart was made by the Rock Island Arsenal and has Serial Number 8433. It was entered by a French owner in the 2007 Beltring War & Peace Show.

The US Army's Rock Island Arsenal was a main manufacturer of the early carts but as war progressed other companies such as John Wood Mfg Company, Trussbilt and Omaha Industries Inc also produced a considerable number of carts.
Early Carts were completely made in aluminum, but on later models a mix of steel and aluminum parts were used. The early aluminum 5-hole rims were soon replaced with all steel spoke wheels. Different types of tires were mounted, and they seem to have been supplied by the Firestone Tire Company and the Good-Year Tire Company.
Canvas Covers were provided for the different carts (M500-M501-M502-M503) and all carts came with two Towing Ropes that could be attached to any corner of the body for additional towing.

Today, any variation of the M3A4 Utility Hand Cart is a rare and desirable collectable and although many are in collectors' hands, it is one of the rather more sought after objects on the US WW2 militaria market. They are hard to come by, especially in Europe where most of these carts were put to good use by local farmers after the war. Many of these carts ended up as scrap metal and whenever one shows up, it's either missing several parts or is completely worn out. The tow bar is almost always missing!

The Firestone Tire Company supplied the majority of the 4.00x12 tires in different patterns for the Carts, but Good-Year tires have been observed on different carts too.
Most common were the Tractor Tread 'Speed King' and Straight Rib Implement types but the  'Champion' tread usually fitted to Signal Corps RL-35 Reel Carts is sometimes encountered on M3A4 Hand Carts, especially on the earlier models equipped with aluminum wheels. The Good-Year tire mounted on 1945 made carts seem to have been mostly of a diamond pattern tread.
No doubt tires were mixed during maintenance or replaced with whatever type available when needed.
US Army WW2 tires are generally marked 'S3' or 'MILITARY'.... 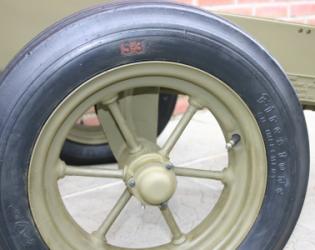 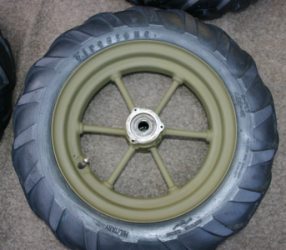 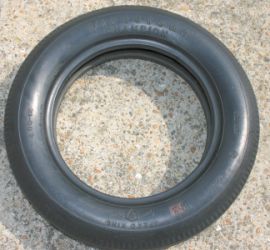 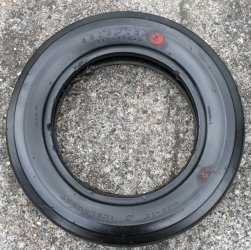 All tires from the Webmaster's Collection

The Good-Year made tire shown above is another type used on the carts. It has the straight rib implement tread generally encountered on Firestone made models. It is marked 'Implement' and 'S-3' with an extra red dot over the '4-Ply' marking. 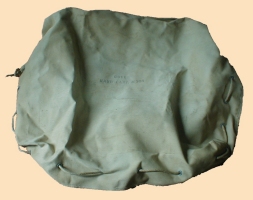 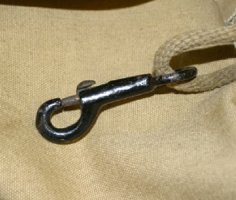 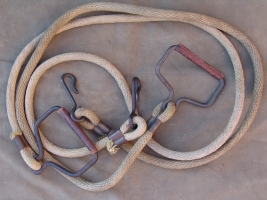 M500 Cover and Clip from private collections, Tow Ropes from the Webmaster's Collection

The M500 Cover for the M3A4 Hand Cart is a rectangular cover with grommets and a rope going all around the cover. Each corner is equipped with a clip to attach the cover to  wire loops on the box.
The Tow Ropes are about 6' long and hook up to the loops provided on each corner of the box. The metal handles are partly covered in leather.

A Data Plate showing Type, Make, Serial Number and Year of Manufacture is riveted to the right side of the box on all M3A4 Hand Carts.
Similar to rifles and other weapons of the US Army during WW2, an Ordnance Inspector marked all carts upon acceptance. This Acceptance Mark was stamped in the upper right corner of the dataplate and varied with the different manufacturers. Since all markings were painted over, it seems these were applied before final painting...

The Machine Gun or Mortar Carts were hardly used in Europe during WW2 and in fact most of the M4A1, M5A1 and M6A1 variations saw their special brackets removed to return them to standard M3A4 Utility configuration. Sometimes even the data plates were altered to change the nomenclature to M3A4.
The plate shown below was fitted to a M5A1 Cal .50 Machine Gun Cart which was brought back to M3A4 standards. The Cal .50 was also changed into Cal .30

Although it is rather uncommon to see hand carts marked in any way, sometimes numbers, tactical signs or even full unit markings as stipulated in Army Regulations are encountered.
Click Here for an excerpt from the 1942 edition AR 850-5 about Unit Identification Markings. 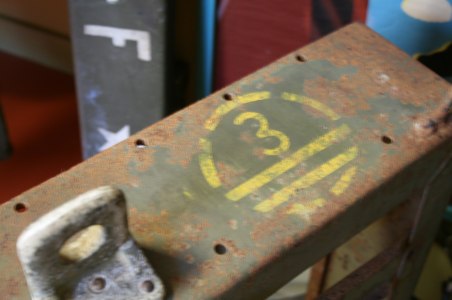 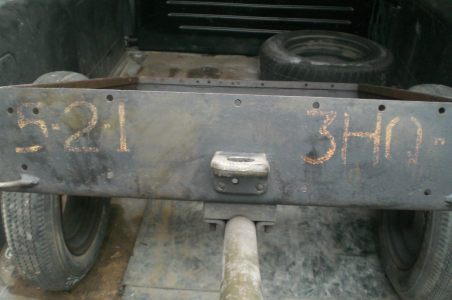 A steel hand cart body with Normandy invasion tactical markings of the 3rd Battalion of the 18th Infantry Regiment of the 1st Infantry Division (Big Red One) above left and a hand cart marked as 6th vehicle of Headquarters, 3rd Battalion, 2nd Infantry Regiment of the 5th Infantry Division on the right. The vehicle number '6' is not visible on this particular picture but the full marking on the cart body is 5-2-I 3HQ-6
Both carts were used in the European campaign in WW2.

Wartime Images of Hand Carts in use

Company Roster of I Company-18th Infantry

John Wayne in 'The Longest Day'! 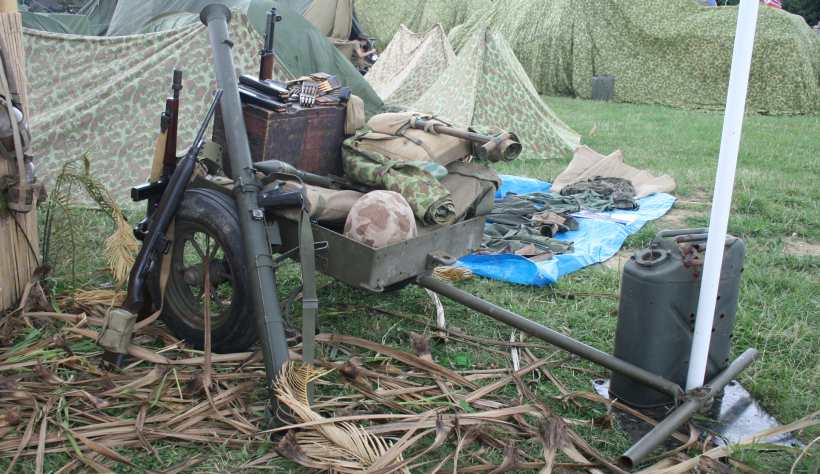 The Cart above displayed at the 2008 Beltring War & Peace Show, is in fact a replica. It is perfect for re-enactments but collectors wanting to buy an original, should do their homework! Caveat Emptor!

Other Carts used by the US Army in the ETO

Two other carts that were used during WW2 in the European Theater of Operations were the RL-35 Reel Cart, used to transport Communication Wire Reels and the M1A1 Chemical Mortar Cart, used by the Chemical Mortar Battalions to transport their heavy 4.2 Inch Chemical Mortars.
While the M1A1 is practically impossible to find, dozens of Reel Carts found their way into collector's hands after several European Armed Forces sold off their stock in the late 1990's 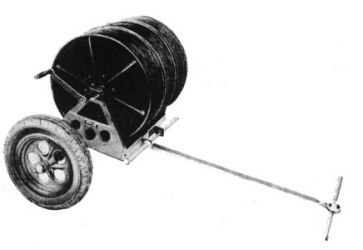 Below are some rare images of Reelcarts being used in WW2. 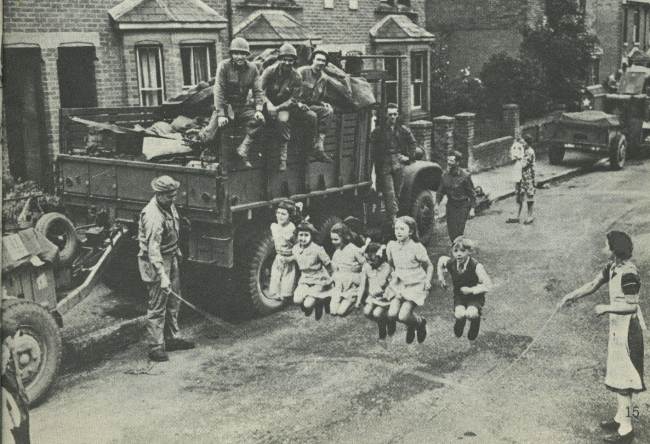 GIs from the 955th Field Artillery Battalion entertain British children while underway to their embarkation points for the Normandy invasion in Southern England, late May 1944. A Reelcart can be seen loaded on the frame of the M10 Ammunition Trailer towed by the 4-Ton 6x6 Diamond-T Truck. 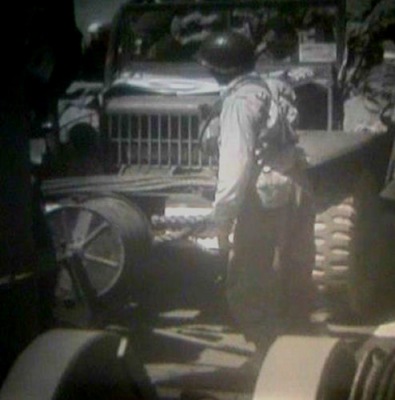 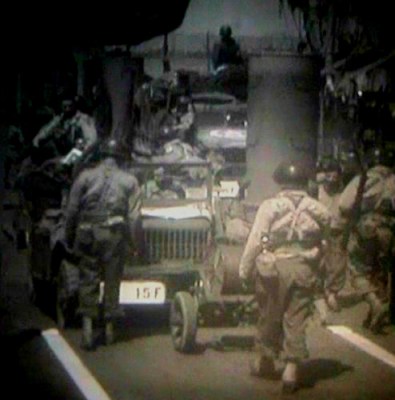 Two images showing a GI from the US 1st Infantry Division's 5th Artillery, loading a Reelcart onto a Landing Craft in preparation of the invasion of France in June 1944.
At the time of the Normandy invasion in June 1944, Engineer and Artillery Battalions of Infantry Divisions were issued Reel Carts for wire laying purposes. 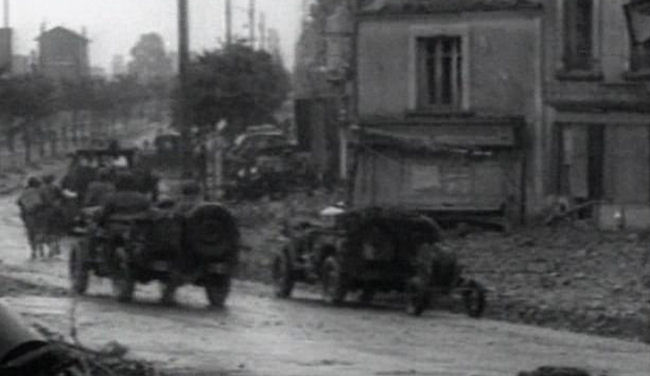 A Reelcart towed behind a Jeep on the road towards Cherbourg, France in June 1944. 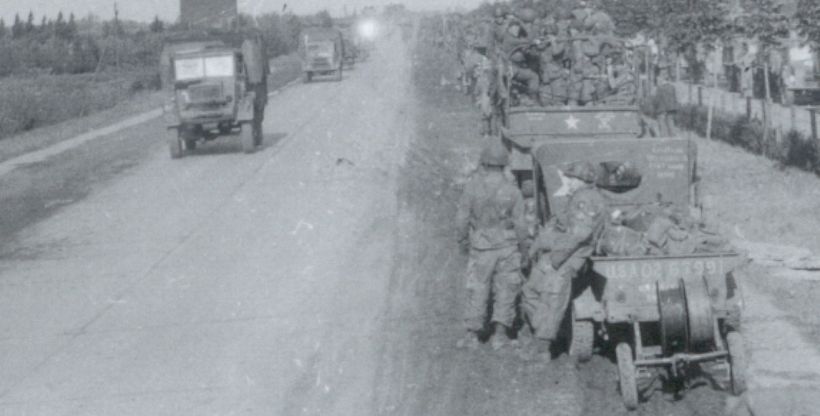 Photo taken by J. Reeder and published in the 2012 book: 'Orange is the Color of the Day'

During Operation Market Garden in early October 1944, the 506th Parachute Infantry moved from Uden to Nijmegen.
The column has come to a halt in Grave; a Reelcart loaded with two DR-4 reels is clearly visible on the right.
The cart is attached to a 1/4 Ton Jeep Trailer by means of an extra towing hook bolted to the trailer's frame.
The addition of towing hooks to the back of Jeep trailers seems to have been rather common within the 101st AB Division in the fall of 1944.
A Tandem Trailer Kit was available near the end of WW2, and that included an extra socket box to be mounted on the right rear of the trailer, which is not fitted here. 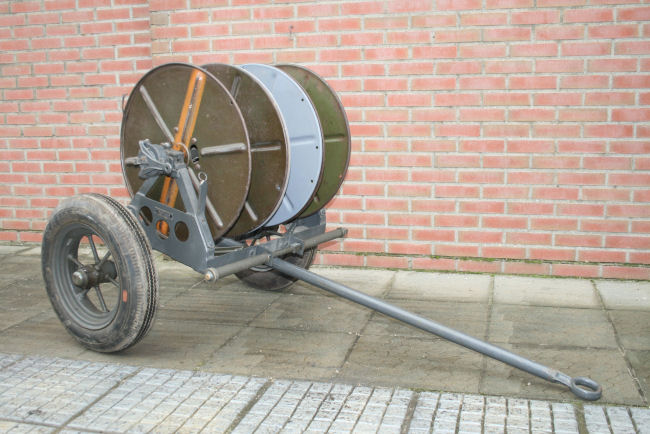 The above RL-35A Ser#1255 was made by the Johnston Lawn Mower Company in 1944 and was added to the collection in September 2010.
It saw service with the Swiss Army after WW2 and except for a gray repaint it was left completely original and was restored in 2011... 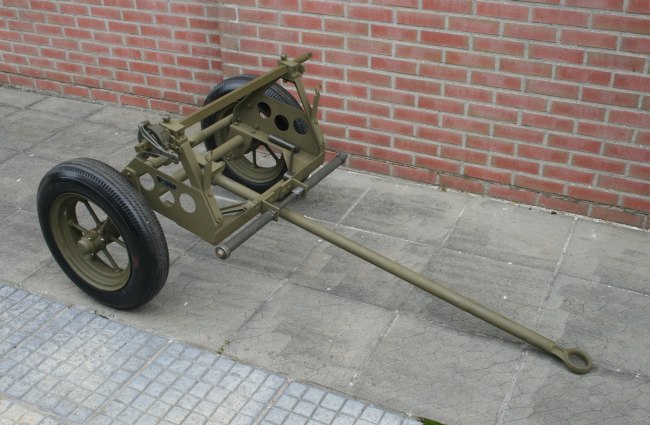 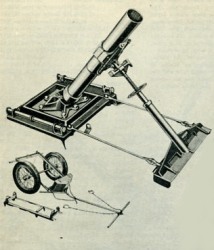 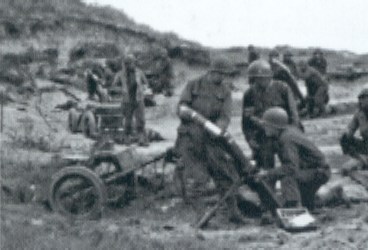 Due to its weight of over 300 Lbs, a Cart was needed to transport the 4.2 Inch Chemical Mortar and its ammunition. Troops of the 87th Chemical Mortar Bn fire their weapon from the dunes on Utah-Beach in support of the 4th Infantry Division on D-Day in Normandy.
Note the 18" Motorcycle Wheels on the M1A1 Cart!

Go to the next page for more information about the restoration of my M3A4 Hand Cart.